Apart from getting wrinkles, going grey is probably the most feared thing about getting older. Finding your first grey or white hair has become something of a societal talking point, even featuring in films and movies as an indication of when ‘it’s time to grow up.’ However, is getting a grey hair really that big of a deal? 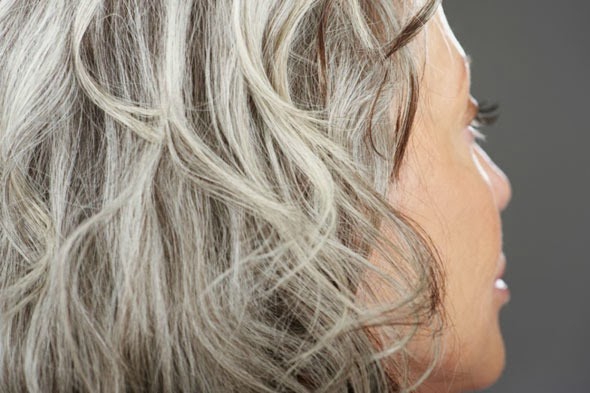 The age at which you’ll get your first grey hair is largely determined by genetics. You’re more than likely to find that first strand of silver hair around the same time as your parents (or even grandparents) started to go grey. However, there are lots of causes of further grey hair and the speed of which the rest of your barnet turns from a lustrous brown to a silver fox grey. Smoking, anemia, insufficient vitamin intake and poor nutrition have all been proven to increase the rate of greying hair, so a healthy lifestyle is vital to ensure you stay away from the hair dye for as long as possible.

Turning grey is a very natural process that happens to us all – the colour change is the result of a lack of pigment production in the hair. Every hair follicle contains cells called melanocytes, which produce the colour that we see within our hair (black, brown, red or yellow.) As you age, these cells become less active and less efficient at producing and depositing the colour where it needs to be. As less pigment is deposited, so our hair becomes lighter and eventually loses pigment altogether when the cells die off. Grey hair occurs when there is a reduced pigment in the hair, making the colour appear washed-out or watered down; white hair occurs when there’s no pigment left at all.

There’s no way to combat greying hair other than to dye over it. Most hair dyes now claim to cover grey hairs and produce a uniformed, natural, glossy colour that doesn’t need to give the game away. Grey hairs are harder and more brittle than their coloured counterparts, purely because their active cells have started to dye off and leave the cell dangling at less than 100% efficiency. Therefore, grey hairs are harder to cover than others so it’s essential to look out for that ‘covers grey’ claim on the box of your hair dye.

Many men and women choose to fully embrace their changing hair colour, particularly as it becomes more of a fashion statement than a sign of age, so there’s nothing wrong with wearing that silver thread with pride. There are now even silver hair dyes so you can rock a grey barnet ahead of your time… Whatever next.

Want to find out more about The Science Bit? Delve beneath the surface of skincare and beauty with my new e-book, available now for only £2.05!