In a world that insists on pursuing the idea of perfection, Barbie has become a timeless icon that many young girls aspire to look like from a young age. Even fully grown adults, and women who should really know better, still insist on trying to manipulate the way they look so ‘Barbie perfection’ can be achieved. This info graphic was sent to me after my post ‘ever wondered what Barbie looks like without makeup?‘ and the results are pretty shocking. Some clever so-and-so has transformed Barbie into a virtual human, taking her exact measurements and replicating them to see what she’d actually look like and to understand if that ‘look’ could ever be achievable. The results are astounding – not only would her wrists be too thin to ever be able to carry her handbag, but her feet are so small that she’d have to crawl around on all fours to get anywhere… Not a look Ken would approve of.  When compared to a catwalk model and an ‘anorexic’, Barbie still comes out on top in terms of disproportionate and completely ridiculous measurements. I know that Barbie isn’t real, she’s just a doll that we’ve all played with to pass the time before Live and Kicking starts (just me?) but I think it’s about time she was updated to reflect body shapes today. I’m not saying that we should make a ‘who ate all the pies’ Barbie, or even a ‘curvy girls rock’ Barbie… Just a Barbie that could actually stand up, carry her bag and not die a painful death because there’s not enough room in her torso for vital organs. What do you think? 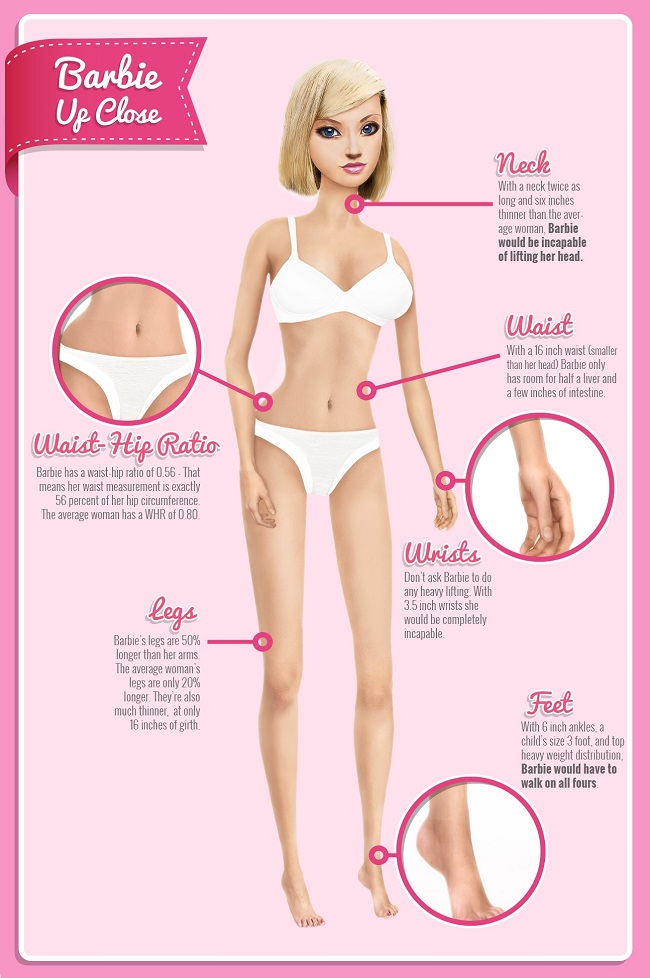