Did you know that March is Ovarian Cancer Awareness Month? One of the lesser known and understood cancers, historically ovarian cancer has been known as ‘the silent killer’. Even today, the symptoms are not well known and the prognosis isn’t great as women often don’t receive treatment until they’re in the later stages of the disease.  Early detection makes a big difference; the overall five-year survival rate for women with ovarian cancer is only 44%. If the cancer is caught before it spreads, the five-year survival rate jumps to 92% – awareness really could save lives.

To support Ovarian Cancer Awareness Month, OPI and Lena White have teamed up with Ovacome to raise awareness and funds for the charity. As teal is the charity’s recognised colour, for every bottle of ‘Teal The Cows Come Home’ sold in March, Lena White will donate £1 to Ovacome. OPI say “We’re hoping that if women are out sporting their ‘Teal Tips’ then not only will it raise some money for a fantastic cause, but it will also get women talking and raise awareness of a horrendous disease” Will you be supporting the campaign and showing off your teal-adorned-talons this March? 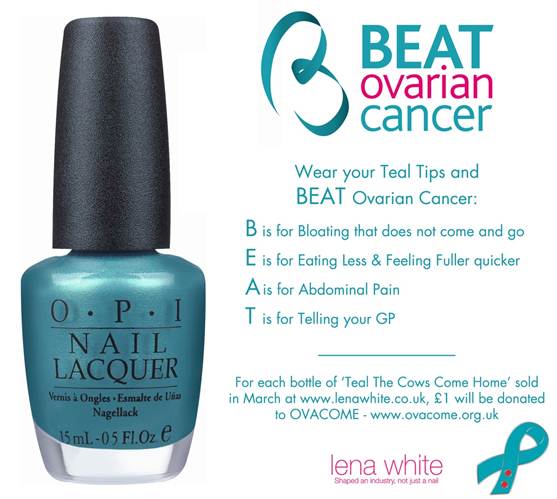