So fricking bad. Because it would mean I could afford this amazing DKNY fragrance bottle. Created in celebration of their latest fragrance ‘Golden Delicious’ (did nobody tell them there was actually an apple called that?) the stunning bottle is carved from polished 14-karat yellow and white gold. It also includes 2,700 Round Brilliant White Diamonds, 183 Golden Yellow Sapphires, a 2.43 carat Flawless Vivid Yellow Canary Diamond and 14-karat white gold making up the Manhattan skyline that is so iconic to the DKNY brand. Wowzer. 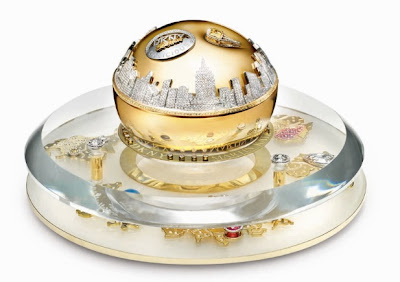 “DKNY Fragrances has partnered with celebrity jeweler Martin Katz to create the world’s first million-dollar fragrance bottle. Bringing to life the rich and sparkling aromas of the new DKNY Golden Delicious Eau de Parfum, the apple-shaped flacon is adorned with rare jewels from around the world. Martin Katz, whose glittery designs regularly grace the red carpet, hand placed each stone in a pattern to mimic the New York City skyline. The process took nearly 1,500 hours to complete, making this “apple” the most regal in the DKNY Delicious Collection.” 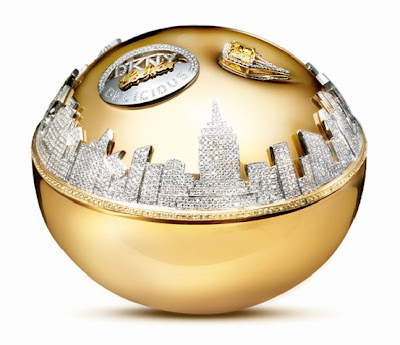 The amazing and breathtaking bottle is currently on display in Dubai airport (where else but the land of extravagance) as part of it’s tour around the world. Eventually it will make its final pitstop on the DNKY facebook page, where it will be available for purchase to benefit Action Against Hunger – a global humanitarian organization committed to ending world hunger. So if you’ve got a spare million quid you could have yourself your very own million dollar perfume bottle… Which you could never use!