I’ve seen a lot about fish pedicures over the last year or so, as well as hearing some pretty horrific stories from people that have literally taken the plunge. There’s something a bit unnerving about something nibbling on your foot – and we’re not talking about a weirdo with a foot fetish, but little wiggly fishies that like nothing more for dinner than a chunk of foot with a side of bunion. Nice. I’ve always been wary about going into those ‘fast food’ joints (excuse the pun) where you sit amongst thirty others with the tanks on rotate, feeling like your in the fish equivalent of McDonalds. Having spent my childhood covered in verrucas thanks to swimming pool diseases, I didn’t really fancy taking the chance of catching athletes foot off Joe Bloggs. I was only going to try this out if I could be a princess about it and visit a top notch salon. 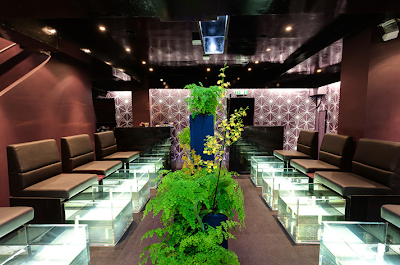 So, last week I tottled down to Aqua Sheko in Soho for my first fishie experience. It’s hidden away on Frith Street in somewhere that looks like a gentleman’s club from the outside – all dark and mysterious. When you go down the stairs and into where the magic happens though, you quickly realise you’re in no gentleman’s club, but in fact a pretty swanky fish bar. (Although no eating of the fishies is allowed… with all that foot for lunch they probably would taste like feet themselves.) There are only a small number of chairs, so you’re never going to be crowded and feel like you’re getting the ‘fast food special’, which makes the whole venue feel very intimate and stylish. 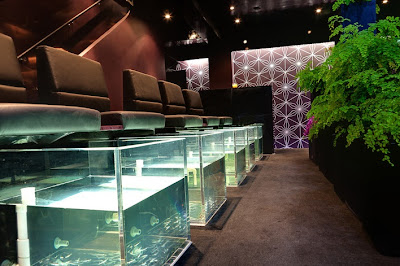 The process starts off with a guy washing your feet (a first for me) to make sure the fishies don’t ingest any toxins or random bits of toe fluff. This is done by hand, rather than walking through a foot bath like the majority of fish salons I’ve seen, making sure that the fish are well looked after and you get the best result. You’re then sat comfortably in one of the luxurious seats and plonk your feet into the tank at the same time so the fish are spread evenly. There’s only one way to explain the reaction of the fish… imagine the way a dog eats its dinner, running in from the garden as soon as it smells it – it’s like that. I swear the fish can smell manky feet. For the first few minutes it’s a really strange, vibrating sensation where the fish get a little bit excited and scoff their faces; after about five minutes it really starts to settle and it becomes a subtle sensation so you forget what’s actually going on. 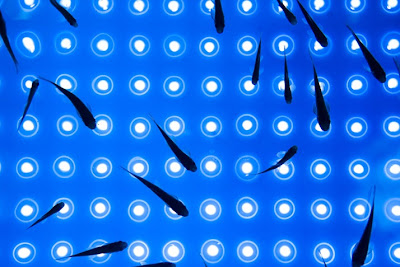 It’s in no way painful, but feels like the fish are giving you little kisses. Some of the big ones suck away quite hard so you end up shaking them off for fear of curling up in a ball of hysterical laughter. Apparently they know exactly where to go, meaning they only target the dead skin which provides them with protein. They need a 5min rest every 35mins, which is why the sessions are limited to this long. After that they’re ready to go again… feisty little buggers that they are. The fish are really looked after, fed on a supplementary diet of cucumber and even ‘put to bed’ at the end of the day with a little cloth covering each tank so they can have a nap. How cute! After the treatment my feet were left super smooth, with the majority of my massive ‘dead skin heel’ gone; it would be best to go back for a couple of treatments to get your feet perfect, especially if you suffer badly from dead skin. 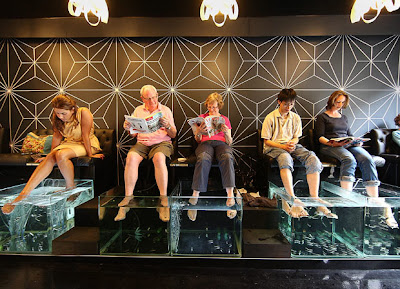 I would thoroughly recommend popping down to Aqua Sheko for a top notch fish session. You’re looked after, as are the fish, and you get super smooth feet and a hot guy to wash them. What more do you want out of a luxury spa treatment? For more info and details of prices go to their website.