I know we’re currently in a recession and everyone is a little bit strapped for cash, but does this really extend to the celebs that grace our screens too? I can’t imagine K-Middy shopping at Primark or Posh popping out to TU at Sainsburys, but there are a few people that apparently are desperate for cash… or why else would they put their name (and face) to these random projects?

First up is Bieber. I know everyone under the age of 18 seems to go weak at the knees at the mention of his name (and to be honest, I did enjoy the Glee ‘Beiber’ episode just a little bit) but he’s taken the world’s obsession a little bit further by launching his very own fragrance. For girls. Yep, you can smell just like what JB would want you to by spritzing a little of his first fragrance, optimistically called ‘Someday’. (That is in no way encouraging a legion of 12 yr olds to run out and by this in the hope that they’ll ‘someday’ meet and marry their idol, is it?) This advert also freaks me out a bit. Hmmm, not convinced.

Also doing their bit for the economy is none other than TOWIE Queen herself, Lauren Goodger. Not satisfied with launching her own tan and taking over the pages of Heat magazine, she’s only gone and launched a fragrance too… with a fox. The fox from Foxy Bingo to be precise. (If you have a job and don’t watch Jeremy Kyle you probably don’t know what this is.) Lauren has given her face to the campaign which sees a man dressed as a fox flogging a scent that embodies bingo. Oh for the love of god. This isn’t even a joke as you can actually buy the scent for £19.99 from http://www.gorgeousshop.co.uk/ or (cough) win a bottle on the bingo. 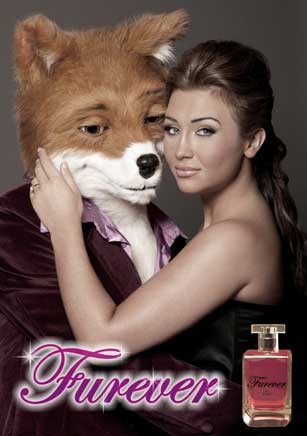 What has your favourite (or most hideous) celebrity endorsed product?