The world of hair seems to be going back to basics of late and re-introducing the classic products that ladies of a certain age swear by. Moroccan (or Argan) oil seems to be one of those ‘hot’ products at the moment that have crept up on us slowly, but surely. I’ve tried the real deal and adored the oil, but it’s pricey at around £30 a bottle so I was keen to try cheaper alternatives. Lee Stafford has released his very own version entitled ‘Argan Oil from Morocco’ (see what he did there?) which is a much more reasonable £11.99.

“Doing exactly what it says on the bottle, Lee Stafford’s Nourishing Miracle Oil with Pro-Argan complex helps to create soft, shiny hair, leaving it in superb condition. While it nurtures and helps enrich hair’s natural shine it delivers a smooth, silky finish without any product build up and also tackles frizz. Argan Oil contains many of the ingredients associated with repairing hair and the creation of luxurious healthy hair. The Berber women of Morocco have used Argan Oil as part of their daily beauty regime for hundreds of years and consider it to have many benefits, including preventing moisture loss in their unforgiving desert surroundings. Now for the first time ever, these ancient beauty secrets, proven for centuries are spreading worldwide!” 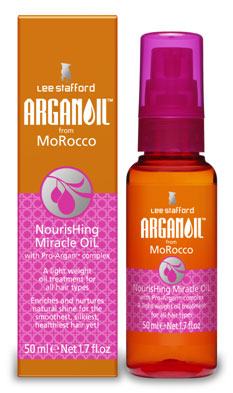 Well that’s a pretty good sales pitch, but what does it actually do? The oil itself is very light and runny which means warming it up in your hands and running through your hair is really easy. When you blow-dry and style your hair it has the effect of a normal serum, basically smoothing and calming frizz while leaving your barnet shiny and easier to style. Although I quite like the lightness of the product, which fits perfectly with my coarse but fine hair, it doesn’t perform anywhere as well as the Moroccan Oil original formula. It’s very much a serum with a posh name in my opinion! It doesn’t keep my hair smoother for longer, doesn’t particularly hydrate or tame my hair any better than any other product and doesn’t make it a huge deal easier to style.

Considering this product was apparently years in the making, I was quite disappointed. I’ve been using it for a few weeks and will continue to do so – but just as an alternative to a serum. I also have an issue with the price: although it’s much less than the £30 100ml bottle of Moroccan Oil, it’s also half the size at 50ml. This means you’re basically paying £22 vs £30 for something that’s nowhere near as good. So on that note I reckon if you’re after dramatic results you should just bite the bullet and spend the cash on the real deal. That way you know you won’t be disappointed.