With the start of 2011 came the January Blues, credit card debt and that sluggish feeling inside. Whereas there was not a lot I could do about the Blues or the debt, there was a little something I could do about that sluggish feeling which was the result of over-indulgence throughout December. I started the Rodial ‘Crash Diet’ system to see if I could budge the bulge and perk myself up a bit. It wasn’t a complete success, but that’s got nothing to do with the products and more to do with my lack of willpower and too much time spent eating canapes… damn those blogger events! 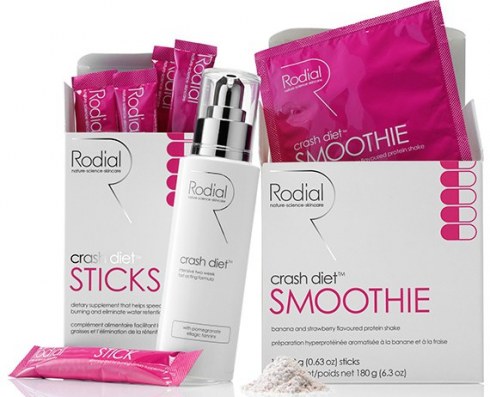 The ‘Crash Diet’ system compromises of smoothies, sticks and a gel that you apply to your bum and thighs after ‘mild exercise’. The whole system claims to burn fat, energise, drain water and keep you fuller for longer so you can squeeze into that dress that you saw on sale that was just a smidgen too tight. To start with I was getting on great, really motivated and frankly sick to death of turkey sandwiches and Quality Street. I was having a smoothie for breakfast or lunch and having healthy meals (i.e. porridge, salads, fish) for the rest of the day – but this soon wore off when I went back to work and started going out for lunch. It’s very hard to say no if you’re surrounded by people eating pizza or jacket potatoes for lunch so more often than not I slipped.

The smoothies did keep me full though when I actually stuck to the regime. I’ve done the Slimfast shake thang many a time in my youth and inevitably I was eating the side of my desk by about 3pm because I was so blasting starving. With the Rodial smoothies I kept going until dinner time, genuinely feeling full up and not needing to snack for the rest of the afternoon – so their claim that they keep you fuller for longer really does stand up. The sticks are my new best friend, tasting delicious as a tea and really making me feel detoxed, less bloated and generally pretty tip top. I really enjoyed this element of the regime because the drinks were really a pleasure to have, tasting like berries and green tea. As for the gel, well, considering I only remembered to use it about twice I can’t really comment… maybe we’ll leave that to another time! 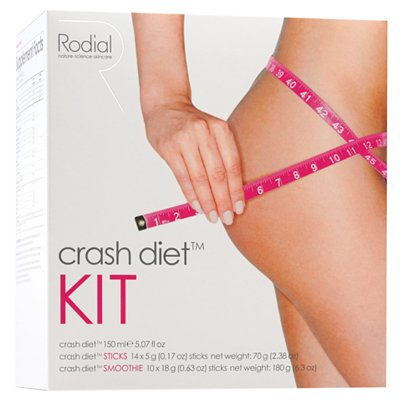 Overall the system is a great one if you’re looking for a detoxing few weeks to make you feel in top shape again after indulgence. I love how you can have the smoothies or sticks in different formats – with water, milk, juice – to really fit into your routine as well as giving you some variety. They taste delicious too (smoothies are banana and strawberry) so it doesn’t feel like you’re punishing yourself by downing something that tastes like it came out of the back end of a cow. Although these aren’t cheap, if you’re serious then they’ll make you feel fabtastic… plus if you spend £48 on meal replacement shakes you bloody well make sure you drink them!