Organic Surge are making a splash on the shelves of your local chemist. Their products are made with some of the best ingredients and essential oils, while shunning the harsh chemicals that can make your head cross. I love the products that I’ve tried so far so I sent a sample of the new Blonde Boost shampoo and conditioner to one of my readers to put through its paces. As a brunette it wasn’t much good for me, so I clearly needed some back-up help in the form of Louise, and this is what she had to say… 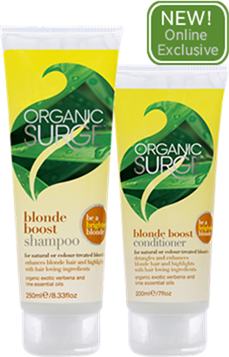 “The fragrance was, mmmm, delicious.  It’s quite zesty but I wouldn’t mind it if the lime was a bit more intense… although it could have the effect of me smelling like a starburst/bathroom cleaning product so I’ll trust that the shampoo developers know better than me on that one!

The shampoo was … well it’s shampoo! I got a good lather out of it, my hair felt clean, it smelt great and had the desired effect. I was quite surprised by the texture of the conditioner as it’s really runny so I didn’t think it would work particularly well (and also means you tend to squeeze a bit too much out) BUT if you want to look like an extra in a Timotei advert circa 1985 then this is your new best friend.  Personally I prefer my hair to be a little, ermm, scrunchier but having said that I did look like a gleaming princess after the first go, which encouraged me to hair flick more than was necessary as I ponced out of the gym changing rooms.

Even after adding some ‘hair scrunch inducing’ mousse the second time I still had super fluffy blonde hair.  It definitely made my highlights look shinier – I always worry that these types of shampoos will bleach out the lo-lights, but after a few uses they’re still going strong too.”

So overall that’s a pretty gleaming (excuse the choice of word there) review of the new Organic Surge Blonde Boost shampoo and conditioner. I’ve tried some of their other variants and have to say that I agree on most points Louise has raised here – the fragrances are amazing, the conditioner is really runny but works quite well and you’re left with a warm tingly feeling inside for using a product with good stuff inside.