At the age of 28 minus four weeks I don’t know how I have never embraced the beauty regime of waxing my bits and pieces. Maybe it’s to do with the fact that I inherited my mother’s distinct lack of hair (too much information?!) or my father’s fear of pain, but up until a few weeks ago the only part of my body that had ever been near a pot of wax was my eyebrows. For this very reason it was a very big deal for me to take the plunge and even consider using the pot of Parissa wax I was sent to try. (Well technically it’s a body sugar, but that’s still sticky and waxy to me.)

The product comes in a compact box, but when you open it you realise it’s been hiding a lot of stuff very effectively… there’s loads! Not only do you get the little pot of sugar, spatulas and waxing strips, but also this little test tube blue thing which you bung on after. All you have to do is heat the sugar in the microwave for a few minutes until it goes like a honey formula and is easy to stir. Then just bung it on your legs in the direction of growth, pop on a strip, smooth down and leave for a few seconds and rip it off in the opposite direction. I have to admit I was expecting it to be bloody painful, but in actual fact it was so fast that I hardly squirked. 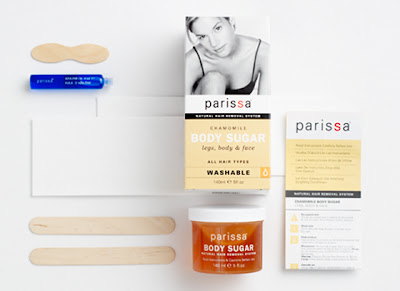 To start with I was well away, getting into the swing of things and ripping those hairs out for close inspection. However, after a couple of goes the wax wasn’t as hot and so it stopped doing anything at all apart from making a mess. When I started trying to manoeuvre round the back of my leg it all started to go wrong… I couldn’t get the strip in the right place, the wax wasn’t hot enough and I was getting fed up. I basically ended up giving up after two half-legs and resorting to the razor, which was frustrating because the sugar was nice in every way. I liked the smell, texture and smooth feeling where I got it right, as well as the fact that it really didn’t hurt.

The instructions were clear, the set contained everything you need and the sugar didn’t leave my legs sticky or sore. I’ve just resigned myself to the fact that I’m just not a wax person. When I don’t have to shave my legs more than once a week (and then unless you had a grope you wouldn’t even know) this seems like a lot of effort for me to go through. If you are a wax person though then I’d imagine this would be a good product for you… there’s not a lot of fuss and it’s suitable for sensitive skin, as well as making the bits I managed to wax super smooth. I’ll just be sticking with my Venus from now on!