When the Topshop makeup range came out I have to say I was more than a little bit dubious. I’d seen pictures and eventually went into store to play around with it and unfortunately wasn’t that impressed. However, now I have to eat my words as I was sent this creamy eyeshadow to try and it really is great. I’ve been told on the grapevine that the people behind MAC are behind this range – although that doesn’t mean the quality is the same, it does give the impression that they know what they’re doing. The shade I have is called Darkness and comes in a little squidgy tube which is surprisingly hard to squidge… you do have to apply some pressure to get the product out, but at least you don’t get too much. 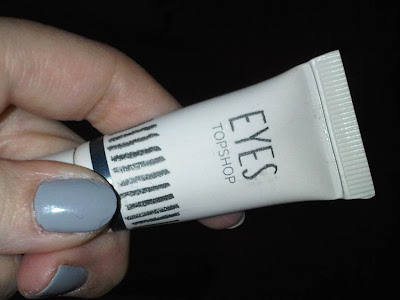 You need such a small amount of this that I found it easier to apply to my hand and use it as a palette. The colour is jet black and features sparkles throughout which really do stand out on your skin. I love the fact that you can either leave the formula thick or blend it out so you can create either a really strong, dark eye or a more subtle smokey one. No matter how thick you pile it on your eye, you can’t feel it and it doesn’t cake. It also lasts all day without a problem so you don’t have to worry about re-applying for the evening. 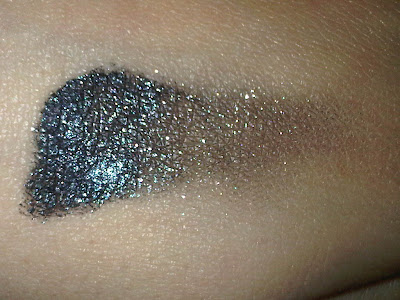 I was seriously impressed with how fab this looks and the result of the colour. Considering it’s only £7.00 I think it’s an absolute bargain too! Just look at my eyes…. ahhhh, pretty. I’ll probably be using this until it runs out completely over Xmas and New Year… which doesn’t happen very often. It’s definitely an easier and stronger application than traditional black eyeshadow, which will last all night long and beyond.