I have an admission to make. In my younger days when I was young, naive and didn’t know any better, I did something that now I deeply regret. I’m ashamed, embarrassed and generally feel a bit of a douche. I got acrylic nails. I know, I know – what was I thinking? How could I be so irresponsible? Did I think I could get away with it? I have to blame the influence of others, namely my Aunt, who forced me into it. Even worse was the fact that I kept these bloody acrylic nails all the way through Uni… that’s four whole years. They’ve never let me forget it either, as ever since they’ve been manky in the strongest meaning of the word. Dry, brittle, flaky, peeling all over the shop… I’m sorry!

No need to fear though, after a lengthy search I may have finally found something to solve all my nail worries. ‘Rescue Me, 10 Day Nail Strengthening System’ from The Nail Doctors seems to have saved me from an eternity in nail hell. There are two steps – Toughen Up base coat which claims to nourish thin, weak nails and Rock On hardener which creates a tough, durable barrier to prevent breakage and to keep in moisture. 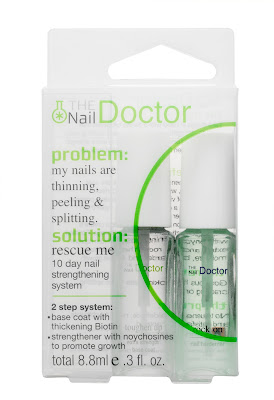 Even though there are two coats they go on smoothly, dry quickly and don’t cause your varnish on top to go all gooey like it sometimes does after a few coats of polish. You’re supposed to use this for ten days, continuing applying and re-applying to get the top result, but I don’t have time to faff that much! I used this ‘system’ as a base coat whenever I did my nails (every 2-3 days) for two weeks, putting a colour and topcoat over the top.

I have to say, I’m impressed. Even after two weeks my nails feel stronger, have been flaking/peeling much less (they’re normally flakier than A List celebs at after parties) and generally look in much better condition. I don’t know if it’s in my head (mmmm) but they also seem to be growing well – or maybe that’s just the fact that they’re not splitting every two minutes. Because they’re in much better condition my polish sits better, meaning I get a smoother and more professional result. This ‘system’ is only £8.99 which I think is a bargain for two products and a real quality result. I’ve got a couple other The Nail Doctor products to try, but this ones definitely a keeper. Take that, acrylic nails!