If you ask people what their biggest beauty disaster has ever been, I guarantee you about 75% will say something to do with fake tan. Whether it’s  going orange, dying hands, streaky legs or generally just looking like you’ve been in the booth with Ross from Friends, it’s really easy to go wrong. I’ve had my fair share of disasters (some of which are still visible on facebook,) the last of which being spray tan related when I actually turned a darker colour than Jordan on holiday. It was not a good look. Since then I’ve been pretty unwilling to step back into the paper knickers, but St Tropez twisted my arm and tempted me to try them out again.

I was invited for a St Tropez spray tan at INC Space in central London on a dreary, drizzley Tuesday afternoon, one day after returning from a festival I had yet to truly recover from. I really wasn’t in the mood, but I dragged myself down with the promise of a night watching Big Brother as a reward. (Is that really a reward?!) Although the place was pretty hard to find, once I was in it was so relaxing and pristine I almost fell asleep waiting for my beauty consultant. (Or was that the festival hangover?) She was so lovely, putting me at ease, explaining the products, letting me try the new range, discussing my needs and what products to use. My fear of the spray gun quickly evaporated – but the paper knickers were still pretty terrifying.

Baring in mind you literally stand in a metal booth in a pair of paper pants that barely cover your bum infront of a complete stranger, I was surprisingly comfortable in her company. Chatting away she started spraying, explaining what she was doing as she went along, making sure she moisturised my knees/elbows/feet and wiping away excess formula off my nails and around my face. Before you know it I was out of the paper undies and back into my proper ones. 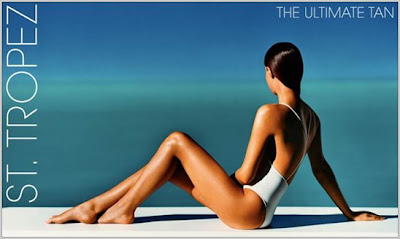 My colour was really rich, without being overbearing and obviously fake. I didn’t come out looking like I’d just been tanned, which is so often where salons have fallen short before – putting so much product on I looked like a woman from the Caribbean. It smelled lovely and subtle, rather than intense and deep like the old St Tropez formula, so I didn’t even mind keeping it on all night until I could wash it off the next morning. When I did I was extremely impressed with the result; my colour was sun-kissed not sun-snogged, natural not un-holy. You couldn’t necessarily tell I’d been tanned, but I didn’t get a lot of comments about ‘looking glowing’ or asked if I’d been on holiday. Result!

I felt sexier and more confident in what I was wearing for the five days it lasted. There was barely a change in colour for the first three days, it only starting to fade on the forth, and only now (6 days later) do I pretty much look my natural colour. Some areas are inevitably still darker, as it’s the dead skin cells that the tan clings on to, but overall there wasn’t a dramatic end to my tanned days. I’d definitely go back and put on the paper pants again – especially if there was a special occasion. Lesson learned: always go to a decent salon and don’t trust someone that’s more orange than Jodie marsh. Thank you St Tropez!